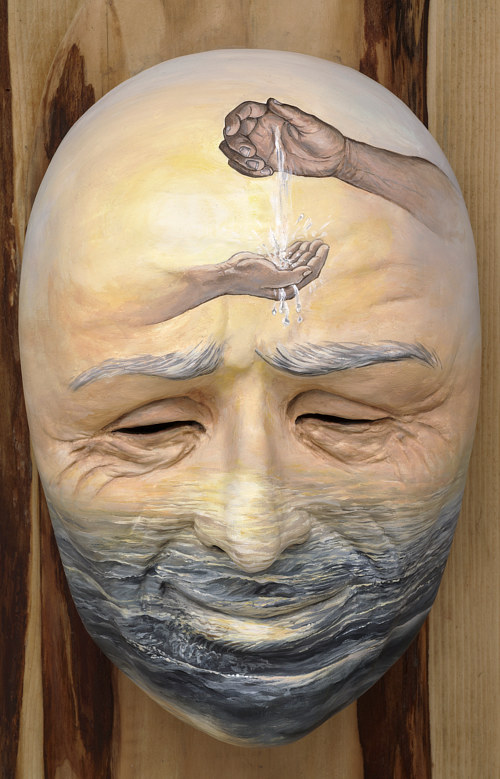 In one drop of water are found all the secrets of all the oceans.

Water is essential for the existence of life on our planet, so it is not surprising that so many philosophical teachings associate its imagery with the answer to the question of what is the essence of life.

There is, for instance, an old parable that yoga and Zen masters have used to reflect upon birth, death and the unity of all things: it is about a small ocean wave that feels puny and insignificant as it compares itself to large and powerful ones. The small wave needs to understand that its form is impermanent and temporary and that its essence is water, just like all the mighty waves it shares the ocean with.

Waves are a metaphor for the flow of change and the constant movement of life. They seem to be perennially born and dying in the shortest space of time, but the water that so briefly assumes the ever-evolving shape of a small or large wave is the same endless substance that has no beginning and no end.

Like people, waves store or dissipate energy. Each one plays its role: some waves are destructive, while others do their discreet and beneficial work by circulating nutrients, carrying warm currents and creating beaches by stirring, suspending and transporting sand.

Big, powerful waves that splash thunderously against rocks scatter their great energy and inspire yet more images about the impermanence of humanity’s mightiest movers and shakers. Each droplet that falls back into the water has the power to create ripples much larger than it is. Similarly each of us has a measure of power that is expressed in different

ways and affects what is around us.

Singly we may have little effect on our surroundings, but our combined actions are very powerful. Together we are the great waters of life. Individually we are a temporary aspect of water, but we are no more separate from the rest of humanity and Nature than a wave is separate from the ocean where it formed.

A trickle of water splashed in your hand cannot be grasped for very long: it feels as insubstantial as life. The sensual, silvery rivulet that wets your skin for a little while is soon transformed into an invisible vapour. Though temporarily hidden from sight, that bit of water may condense as a cloud and will return somewhere else at some point in time in some other shape, perhaps as a magnificent ice crystal or a humble raindrop.

Tiny droplets create spectacular rainbows. As raindrops fall back to earth, they replenish rivers and oceans, wet soils that nourish and sustain millions of other life forms. Though small, they are no less important than the largest bodies of water.