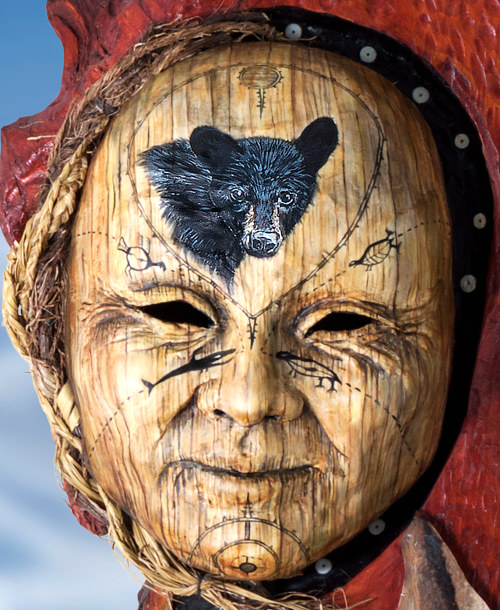 This piece was inspired by the plight of a black bear cub orphaned by trophy hunters in British Columbia.

Western culture almost obliterated several others when it colonized every continent, but despite this loss, seeing the world through what is left of other culture’s perceptions is a way to gain a better perspective on one’s own.

I based this artwork on the Inuit worldview. Their culture developed in an extremely harsh environment where people survived by learning to see the world through the eyes of the animals they hunted. This was also reflected in the masks they created.

The present piece echoes an Inuit mask (classified by anthropologists as an Inua mask). It was a highly stylized bear-face with a tiny human face peering from one of its eye sockets.

Inua is a word-concept that isn’t easily translated, but essentially it reflects how the Inuit hunted the animals they needed for food by spiritually uniting themselves to them in a world permeated with a shared spirit-force. Becoming one with the animal was achieved by learning how the other being lives, thinks, reacts and communicates. It required a union with a spiritual force, an inner vitality that is different from the individual souls of people and animals and exists in everything.

Shamans assisted hunters in this spiritual Inua union that made hunting a matter of respect and collaboration rather than an individual’s proud achievement. Inuit elders taught their young that a hunter needs to be humble like an animal, rather than arrogant like a man.

By contrast western people often hunt for recreation and pride rather than survival. Some claim they are no different than any other predator that helps natural selection and evolution. In actual fact, Nature culls the weakest and the misfits while trophy hunters weaken species by killing the finest and largest specimens.

We don’t have masks that invite animal spirits. We have animal heads that taxidermy art turns into a status symbol for an arrogant hunter who feels no thankfulness toward the vanquished prey, asks no forgiveness, boasts about his killing skills and enjoys being reminded of his deed.

I think the dead animal’s head that is used as a decorator item truly captures the materialistic essence of a culture that is spiritually disconnected from nature.