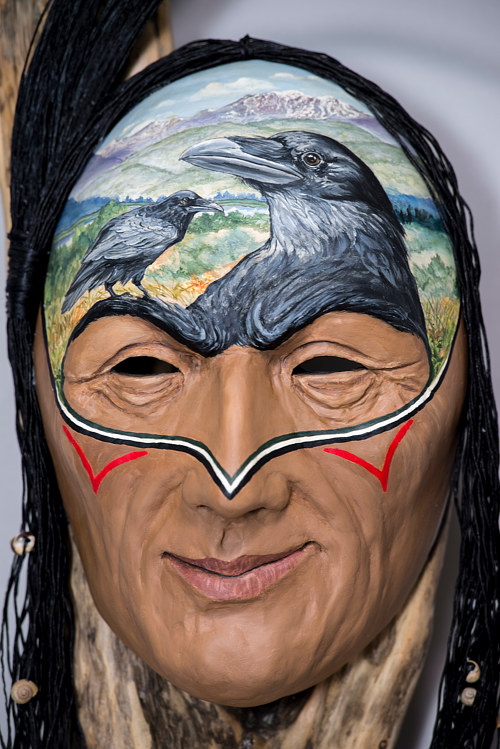 The ravens and crows of British Columbia, the Province where I live, always fascinated me. I'm not surprised that local Native people associated them with supernatural spirits that created the world with their magical minds.

Ravens and crows have not always fared well in places where superstitious minds associated them with ill omens and death, but long ago, in Northern Europe they were thought to be very smart. The Norse God Odin, for instance, named his ravens Hugin (Memory) and Munin (Thought) and they reported to him anything worthy of notice. Ravens embodied the Spirit of the Observer.

In West Coast Native myths, Raven was often a clown, a trickster, a shape-shifting master of disguise or a selfish, impulsive, greedy glutton. Despite this, he was also respected, admired and revered because his creative energy was deemed to have brought into being the Age of Men.

Most people associate bird’s brains with stupidity and scientist thought that too because birds do not have the large, elaborate cerebral cortex that allows humans to make complex decisions. Yet, as neurologist Stanley Cobb demonstrated back in the 1960’s, the frontal part of their brain is equipped with a structure called the hyperstriatum that allows them to perform higher functions.

Ravens and other members of their family have the largest hyperstriatums, enabling them to solve complex problems, cooperate with each other, manipulate other creatures (often by mimicking their sounds) and remember hundreds of places where they hid food. The were even observed counting objects in experiments set to test their mathematical abilities. In fact, ravens and crows appear to experience the world with their own particular form of awareness.

Mythology made them magical creatures endowed with supernatural gifts, but the natural abilities of these birds are impressive enough. There is a keen, observing mind behind those Raven eyes and it deserves our respect, awe and appreciation.